Uncrewed minesweeping systems, designed by Atlas Elektronik, will detect and destroy sea mines on naval operations for the UK Royal Navy, thanks to a £25 million contract announced Tuesday.

More than 25 jobs will be supported through the contract to deliver SWEEP at the Dorset-based company, plus 48 more jobs in the supply chain, the UK Government said in a statement.

The system will allow personnel to neutralize mines from a remote and safe distance at sea while on operations worldwide, keeping sailors safe.

UK's Defence Minister Jeremy Quin said: This next-generation autonomous technology will be instrumental to our goal of protecting the safety and security of our personnel, while also reaffirming the UK's unwavering commitment to improve the safety of international waters."

The SWEEP is designed to detect more modern and smarter digital sea mines, which target ships and submarines passing overhead.

Each SWEEP system comprises an Autonomous Surface Vessel that tows a sensor unit behind it. The unit uses magnetic, acoustic, and electric technology to identify and neutralize different types of sea mines. The system is controlled by a Portable Command Centre which can be based at sea or on land. 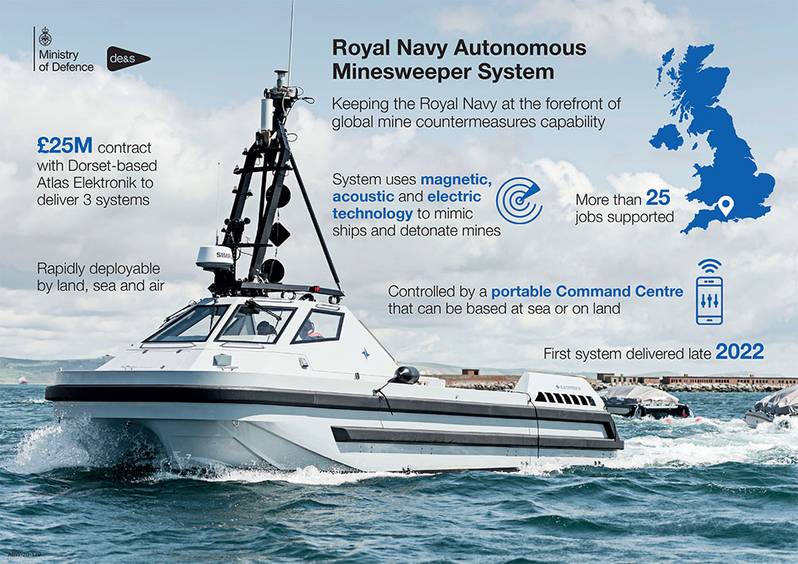 "The technology, which has been developed in the UK, can be rapidly deployed by land, sea and air and will offer increased protection to military and commercial vessels," the gov't said.

DE&S CEO Sir Simon Bollom said: "This cutting-edge SWEEP technology follows hot on the heels of the contract negotiated for equally innovative autonomous minehunters and provides the Royal Navy with the increased capability they need to deal with modern mine threats. The first system will be delivered in late 2022 and will enter operational evaluation before service at a later date."

New ASV Delivered to the US Navy

European countries are providing help for Taiwan’s indigenous submarine project, the island’s defense ministry said, in a rare admission that the sensitive program is not getting

The U.S. Navy uses unmanned and robotic underwater vehicles for a multitude of functions, including environmental sensing, mine hunting, and salvage.  The Navy plans to evolve an